How does Russia export its oil? (3)

In 2014, American politician John McCain said, “Russia is a gas station masquerading as a country.” It turns out that the majority of Russian oil shipped around the world is transported by tanker. In this article, we will look at how the country exports its oil by sea to Europe.

Historically, Russia has been a major supplier of oil to Europe and will remain so in 2022. European refiners are scrambling to make deals before EU restrictions on imports and shipments take effect.

At the beginning of this year, Russia was exporting 11 million tons of crude oil by ship to the EU every month. This represented 60% of all Russian crude oil exports by sea, and 30% of EU crude oil imports by sea.

The International Energy Agency (IEA) predicts that Russian oil production will fall by nearly 2 million barrels per day in 2023 compared to pre-war production, a reduction of nearly 20% due to sanctions imposed by the G7 countries.

These estimates should be taken with a pinch of salt, since last March the IEA predicted that Russian production would fall by 25% in the first months of the war.

Europeans are compensating for the loss of Russian crude oil volumes by increasing supplies mainly from the Middle East, but also from Africa, Norway, Brazil and Guyana.

The task of replacing refined products from Russia is more complicated. There is already a severe shortage of refining capacity in the market.

In October, diesel imports into the EU increased by nearly half from pre-war levels, due to strikes at French refineries and seasonal maintenance. According to the International Energy Agency, EU sanctions on Russian diesel exports will increase competition in an already “exceptionally tight” market.

Russia controls some of the largest refineries in the EU through companies such as Rosneft and Lukoil. To ensure its energy security, Germany recently took control of the Schwedt refinery which supplies about 90% of Berlin’s fuel needs. Italy, for its part, is considering buying the ISAB refinery, owned by Lukoil, located in Sicily.

On the other hand, Bulgaria has agreed with the Lukoil refinery located on its territory that it would continue to be supplied with Russian crude oil.  This would constitute a violation of the EU sanctions regime, as Bulgaria imports Russian oil by ship (Black Sea).

Before the conflict broke out in Ukraine, about two-thirds of Russian crude oil delivered by ship to Europe left from the Baltic ports of Primorsk and Ust-Luga. The Netherlands, with the port of Rotterdam, was the largest importer of oil from Russia.

At the moment, negotiations on limiting the price of Russian oil are at an impasse. According to the New York Times, opinions within the European Union are currently “too divided”.

The price cap is a ban on shipping, insurance and reinsurance companies handling Russian crude oil shipments worldwide, unless they are sold at a price not exceeding that set by the G7 and its allies.

The latest news is that the G7 countries are in talks to cap the price of Russian oil at US$65 and US$70 a barrel. Analysts believe that this measure, even if approved, should not have a significant impact on Moscow’s oil revenues.

The Kremlin has repeatedly stated that Russia has no intention of supplying oil to countries that support a price cap.

Western leaders clearly still do not understand why these sanctions are doomed to fail. They cannot control the amount of oil exported by Russia and its price at the same time. They have to choose one of the two.

Nearly 300 days after the war began and despite countless diplomatic initiatives to stem the flow of dollars to Russia, the country is producing almost as much oil as it did before the invasion. And regardless of the sanctions, Russian oil will continue to reach Europe.

According to Nikkei Asia’s report, ship-to-ship transfers are one of the ways in which sellers and buyers of Russian oil conceal the origin of supplies. This practice allows sanctioned commodities to continue to be traded.

During the first six months of the conflict in Ukraine, 175 transfers took place off the Greek coast involving Russian tankers compared to only 9 transfers during the same period last year.

The second way to circumvent sanctions is to import Russian oil from a third country that does not impose restrictions. As a reminder, the possible sanctions of the G7 countries will not apply to Russian crude oil, imported by a third country and then resold after refining to a European country. 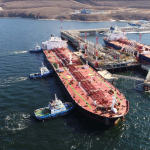